Some touted it as the new high-yielding wheat class that would free farmers from the rigid standards of CWRS, but nearly four years after its creation, Canada Northern Hard Red (CNHR) hasn’t made much of a dent in Prairie wheat acreage.

Some predicted CNHR’s acres would rival or even surpass Canada Western Red Spring. The thinking was that post-Canadian Wheat Board, a class with slightly lower quality but higher yield would excel in an open market. But CNHR accounted for just two per cent of total insured Prairie wheat acres in 2018. That was up 12 per cent from 2017, but largely because some former CWRS varieties were reclassified as CNHR. That upset many farmers in Alberta and Saskatchewan — 25 popular CWRS and Canada Prairie Spring (CPS) red wheats were transferred to CNHR August 1, 2018, resulting in lower prices.

CNHR is “the class where good varieties go to die,” west-central Saskatchewan farmer David Kucher tweeted in response to a request for CNHR feedback.

The Canadian Grain Commission (CGC) added to the anger over class “demotions” when last April it announced that five more CWRS wheats — AAC Redwater, AC Domain, Muchmore, Vesper and 5605 HR CL — will move to CNHR in 2021.

AAC Redwater is popular with Alberta farmers in the Parkland region because it matures four to five days earlier than other varieties but still yields well, Alberta Wheat Commission (AWC) general manager Tom Steve said in an interview last spring.

Gives every variety a home

Starting August 1, 2015, on an “interim” basis, then made permanent by the Canadian Grain Commission in January 2016, CNHR was created after a year of industry consultation. It was designed to give Western farmers and Canadian wheat customers access to new varieties, while protecting CWRS and CPS quality.

“I think it’s (CNHR) an important class because it fills a hole and gives every (wheat) product a home,” says Todd Hyra, SeCan’s business manager for Western Canada.

Adam Dyck, Canadian program manager for British baker Warburtons, which buys Western Canadian wheat, sees CNHR as a tool, rather than a class.

“It’s a tool to get varieties registered,” he says. “There was a time when stuff coming through registration… there would be nowhere for a variety to go. We’re at a stage now where there’s a class for every wheat variety to go into.”

That gives wheat breeders, farmers and end-users valuable options, says Hyra. A breeder might develop a wheat highly resistant to fusarium head blight, but in the past if the end-use quality didn’t meet the class standard it wouldn’t get registered. CNHR, along with Canada Western Special Purpose (CWSP), a class created in 2008, ends that problem.

The demand for the new class was largely driven by farmers who wanted to grow high-yielding U.S. spring wheat varieties. One was the late John Smith, president of Seed Depot in Pilot Mound, Man. In 2012 Smith began a quest to get Faller and Prosper, two high-yielding Dark Northern Spring (DNS) wheats registered in Canada. 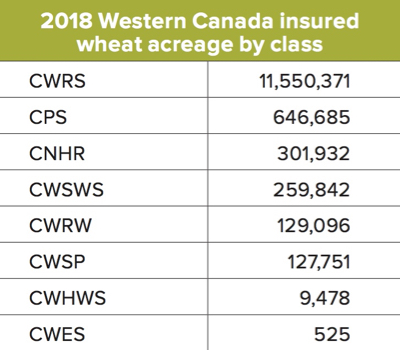 In February 2015 the Prairie Recommending Committee for Wheat, Rye and Triticale (PRCWRT) recommended interim registration for both varieties, which for several years had been grown under identity-preserved Warburton contracts.

In a letter to then-CGC chief commissioner Elwin Hermanson in 2015, Smith foresaw challenges the new class would create. “When anticipating the way the wheat classes will function after envisioned changes in classes are implemented, we believe the uncomfortable transition period is easily justified to achieve this end.”

That may be because registration of some hot new CWRS varieties has narrowed the yield gap. Four years ago Faller and Prosper consistently outyielded CWRS by 20 per cent, offsetting a CNHR discount to CWRS which ranges between 20 and 50 cents a bushel. But over the last three years Manitoba CNHR yields averaged only 11 per cent above CWRS.

John Smith’s son Walter, now one of the owners of Seed Depot, says Faller is a money-maker.

“We farm too (as well as operating a seed business),” he says. “For us we have a tough time replicating the profit we can make growing something like Faller with anything else on our farm. There might not be an international market but we still have the option to grow, which is awesome in itself.

“You’re getting a 20 per cent better yield (with Faller) and maybe a five per cent price discount. Those farmers (growing it) aren’t spending any extra to get that yield. It’s just pure profit in their pocket.”

“Huge yields with it, but really low protein,” he responded in a tweet. “Sold it into the feed market and will continue to grow it. Bids around here are around 25 to 50 cents (a bushel) lower than HRS (CWRS). This year the yield made up for the price spread. See what next year brings.”

Another farmer tweeted: “Grew it (Faller) for the first time this year on a Warburtons’ contract. Got rejected for low protein. Sold into States for better price and shorter haul. Likely won’t grow again.”

But Faller remains one of Warburtons’ best varieties.

With relatively few CNHR acres it’s no surprise the CNHR class hasn’t made a splash internationally.

“If the supply isn’t consistent they (customers) are less likely to want it unless the price convinces them to want it,” says John Peterson, Richardson International’s assistant vice-president of wheat merchandising and hedging.

“If you don’t have CNHR to offer on a consistent basis then it’s something that is secondary to a transaction and CWRS would be the main pull.”

Until 2018, CNHR was just Faller, Prosper and Elgin ND, and most acres were in southern Manitoba, Peterson notes.

“I don’t think we’ve sold any CNHR off the West Coast, at least as CNHR,” he says, adding some could have been sold in a blend or by specifications. “And off the East Coast, it’s minor.

“There might be some niche opportunities, but we’re not developing large-scale programs necessarily.”

That may be why some farmers, including Crystal City, Man. farmer Landon Friesen, sell their Faller in the U.S. “The Canadian system of wheat ‘classes’ doesn’t make sense to me,” he said in a tweet. “Millers want it (CNHR) just as much as CWRS, but yet they pay 25 cents a bushel less for it in Canada. Only reason we grow it is to move it south and get a better price.”

Peterson is reserving judgment on CNHR. While he doesn’t think the new class adds a lot of extra system costs, he’s a bit worried about the potential for lower-value CNHR wheats getting mixed into CWRS. The tolerance for admixtures is low and can result in expensive downgrading.

Things can change, but main export demand now is for CWRS, says Peterson. “The CWRS class has got some recognition to it, people understand it and if we can supply what the market wants, and if it still works for the farmer, that’s what we should be selling.”

Alberta Wheat Commission’s Tom Steve wonders if nine Western Canadian milling wheat classes are too many. CNHR could confuse wheat customers given it consists of wheats from three classes — CWRS, CPS and DNS.

“The Canadian wheat classes are consistent,” says Daryl Beswitherick, the CGC’s program manager for quality assurance standards. “There could be a variation in kernel sizes but this shouldn’t have a big impact on end-use functionality.”

“I do not see CNHR being sold as a class in the traditional sense,” Cereals Canada president Cam Dahl said in an email. “Rather it is a holding spot for varieties that have specific value that are sold based on specification or as a single variety lot.”

Farmers, meanwhile, are voting with their feet, says market analyst Mike Jubinville of MarketsFarm. “Acres are falling off a cliff,” he says.

But that doesn’t mean a future CNHR wheat can’t be a blockbuster, says Hyra. But going up against CWRS isn’t easy, he adds. “Any of the smaller classes really have to have exceptional agronomics in order to carve out a home.”