ROSTHERN, Sask. — In 1933, Abe and Elizabeth Fehr of Neuanlage, Sask., took their seven children on a desperate journey.

Across Canada, the economic collapse of the Great Depression forced them and other families to uproot their lives in search of a better future.

As crops withered in drought and poverty deepened, Abe took his family from the homestead and set out for the greener fields of northern Alberta’s Peace River country.

Today, the route has smooth blacktop travelled by more refined vehicles, but it’s still a long trip of about 1,200 kilometres.

The leaf springs must have groaned as the Fehrs loaded their 1926 Chevy, hooked up a trailer and headed northwest, leaving family and friends behind. 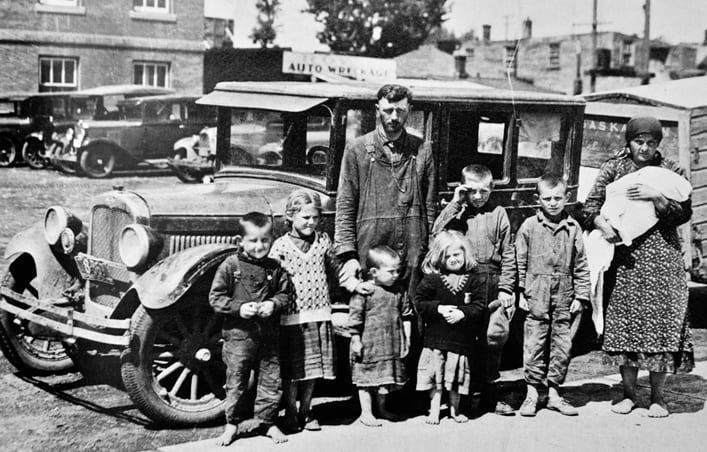 But success proved elusive. They were flooded out at their new homestead and a year later decided to make the long trek back home to Saskatchewan.

In June of 1934, the 26 horsepower, four-cylinder three-speed got as far as Edmonton before a broken rear axle stranded the family.

Using his skills and resourcefulness as a blacksmith and farmer, Abe was able to forge and weld the axle back together.

Ten-year-old Corny was sent to beg for food as the only child who knew English within the German–speaking family.

About this time, an Edmonton reporter wandered by and made the family portrait, which has since become one of Canada’s iconic photographs of the Great Depression.

Bart Campbell of Medicine Hat, Alta., has been looking at this famous photo for years, most recently as he read Barry Broadfoot’s book, Ten Lost Years, which is a collection of short stories about the 1930s.

“I have an elderly neighbour and I chose to read to him because his vision is fading and that’s a perfect book because it’s his era,” said Campbell.

“Almost every day I opened that book and see that same picture of the Fehr family. And over the course of probably 300 times looking at it, it just continues to draw me in and I start to look at it deeper.

“If you study it, you see the bare feet, you look at the man’s expression, the worn-out car, the trailer, just so many aspects to it.”

Campbell was also intrigued about the Depression, having remembered conversations with his late grandfather.

The third link in his story is a love of vintage automobiles. He began to plan a road trip in commemoration and respect for the Fehr’s trip so long ago.

“I thought, well, if Abraham Fehr can drive through the Prairies with seven children with challenging times and stressful times and a worn-out car, I’m sure I can do a long trip in a car that I’ve refurbished and in good shape under modern circumstances,” he said.

His initial plan to complete a 1,200 km leisurely road tour from Medicine Hat to Hague, Sask., shifted gears when he learned that four of Abe and Elizabeth Fehr’s surviving children continue to live in the area of their parents’ original family farm.

He met with Abe’s grandson, Jim Fehr, and his wife, Doreen, and heard the back story behind the photo — how the family went door to door, begging for food on the day the axle broke.

“The critical point of the whole story Jim really emphasized to me was that they made that trip with no money and the kindness of others and they had to make the whole way home because they’re broke,” Campbell said.

“I started to realize, ‘wow, that’s an aspect of the story I hadn’t considered earlier. I’m going to pull up my credit card and I’m going to run this trip without it’. ”

The new plan for Campbell and his wife, Lisa, was to make a 1,200 km trek without money, food or fuel reserves.

In April of this year, his plan crystallized after a chance meeting in a Saskatoon bookstore with Don Wilkins, a total stranger to Campbell at the time.

“I pull a book off the shelf that has that famous photo on the front cover and he notices it at the same time as me. We’ve never spoken. We start to discuss that photo and he knows it very well and he indicates he used to have a car like that in the photo.

“So I say, I own one too. From my iPhone I show my car to this fellow, and he goes, ‘yeah, I think that used to be my car,’ ” Campbell said.

It was soon confirmed that Campbell had indeed purchased the same 1926 Chevy that Wilkins had restored in 1960 before selling it.

“All within three to five minutes of knowing each other with an incredible amount of emotion, Don Wilkins says to me, ‘you have to recreate the journey just like that with no money,’ ” Campbell recalled.

“I started to realize something special is happening. I could feel it. Something bigger was happening than I was making it out to be and other forces were bringing together pieces of the puzzle.

“Meeting Don Wilkins was really the icing on the cake. I said to him immediately, ‘you are now part of my journey because you restored this car for me in 1960, getting it ready for me today’. ”

Campbell and his wife decided their 1,200 km journey from Medicine Hat would end in Warman, Sask., where the Fehr family were planning a family reunion.

Staying off the main highways, they drove east to Leader, southeast through Swift Current and Moose Jaw, north toward Davidson and on to Warman, which is near Neuanlage.

“We had to stay on secondary roads because the car is so slow. It isn’t the original route the Fehrs took because they went up from Neuanlage to Peace River and Peace River back to Neuanlage. Nobody really knows their route,” Campbell said.

“We didn’t have a firm plan because of course the circumstances and no money, you have to really allow yourself any time frame that could happen.”

In preparation for the Sept. 4 launch, Campbell also spent this past summer test driving his vintage automobile around Medicine Hat. The car was nicknamed Stella as a tribute to their neighbour’s late wife.

Because this model did not pump oil from the crankcase to the top of the engine, regular maintenance was required every 50 hours to refill the oil reservoirs and re-saturate the felt cloth on top of the engine.

“I was asked how fast I drove the Chevrolet,” said Campbell. “With only 26 h.p., Stella drives as fast as she wants. With this vintage of automobile the driver must become more in tune with the car and find the sweet spot by listening to the engine, temperature of the drive train, paying attention to the wind and hills. You travel at the speed Stella likes to go.”

With no specific schedule, the couple took their time and allowed circumstances to unfold for better or worse.

They took short-term cleaning jobs in Swift Current to earn money for fuel.

Near the village of Elbow, they winterized a cabin and mowed the grass in exchange for supper and a bed.

On one of those travel days Campbell went for a walk beside some railroad tracks, where a crew shift was underway. He said he looked somewhat shabby, having just greased the car.

Lisa took up the tale.

“One of the guys came to him and asked if he was OK. And he was like, yeah. He says, ‘are you hungry?’ and he gave Bart a muffin. And then he took him for breakfast.”

Travelling without cash or credit cards was a difficult decision. The Campbells said it tested their faith, humility and pride. 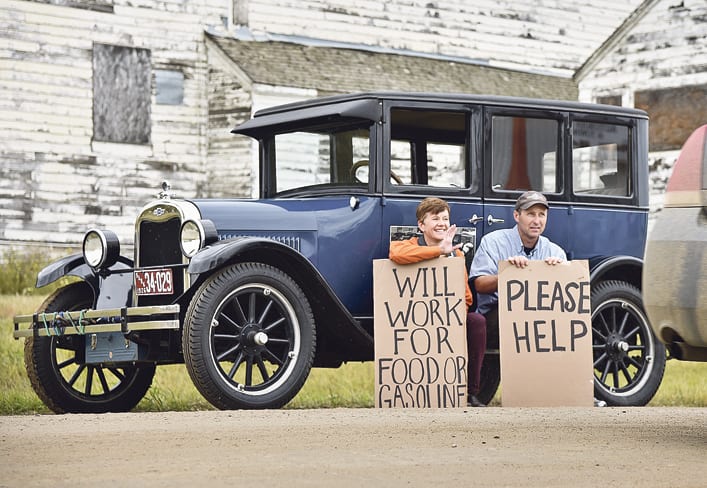 Bart and Lisa Campbell hold some of the signs they made for their 10-day journey from Medicine Hat, Alta., to Warman, Sask. in Stella, their 1926 Chevrolet. | William DeKay photo

“The hardest point was to switch gears emotionally from here we are, that we can afford to do this trip, to changing the entire plan, the modus operandi that we’re begging for food when we know we don’t have to,” said Bart.

“But we had to go through that role reversal and ask for help from people. That was incredibly emotionally challenging”

Added Lisa: “It’s one thing to help people. It’s another to receive.”

However, words from a stranger they met on the way provided encouragement.

Road weary and a bit dazed by generosity and being the centre of many people’s attention, the Campbells pulled into Warman after 10 days, with a long list of newfound friends and memories.

During the Fehr reunion, Bart found a quiet moment to reflect while watching the large family gathering.

“All of a sudden I was overwhelmed with emotion that a single inspiration that brought more than 120 people together for not a funeral, not a wedding, just because they are family. I’m not taking credit as a person for that. It was the idea that brought the family together,” he said.

“It was very, very touching to see the Campbells bring the Fehr history to life. We’ve got lifelong friends there, somebody that would take this on themselves to do this journey. It was an honour to the Fehr family of the journey that they made. It was quite heart-warming.”

Campbell said it was a privilege to have taken on the challenge.

“I feel incredibly fortunate in my life to have had something epic happen once. Somebody asked me what’s next, but I have no aspirations.

“If anything ever crosses my plate of this nature again, I’m going to completely savour what happened because it was from the heart, it was all inspired, and it was something that came together in a special, special way. I feel incredibly fortunate that this was a gift that I got to take care of.”