Alice Guthrie won bronze for the Dick Beamish award for her article, From a voice, buffalo. To view the full article, please visit Small Farm Reader. 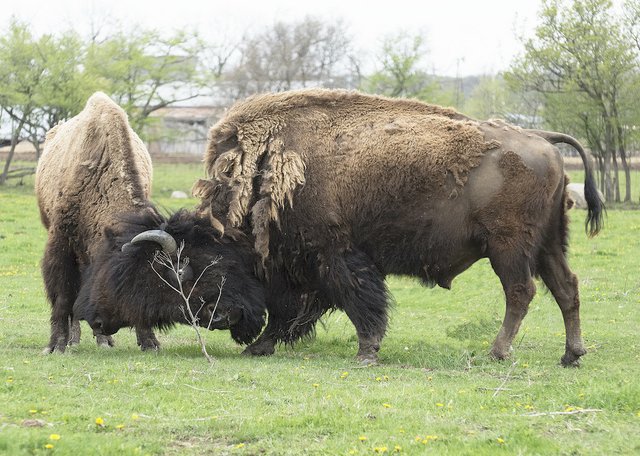 A young bull challenges the dominant bull, Ace, to a pushing contest. He didn’t win. Ace stands over seven feet at the shoulder.

“Oh give me a home where the buffalo roam, where the deer and the antelope play, where seldom is heard a discouraging word, and the skies are not cloudy all day.”

Not too many deer, and no antelope at all inhabit Mike Water’s world, but a number of shaggy buffalo do roam the fields of the farm he calls home. It is a peaceful spot and if you met Mike today, you would think that he had grown up in such a peaceful atmosphere.

Nothing could be further from the truth.

Mike’s early years were difficult. Abandoned by his mom and step dad at age seven, and separated from his siblings by the Children’s Aid Society (CAS), Mike endured many hardships in foster care, including abuse at the hands of a sadistic sexual predator at a boys’ ranch near Copetown, Ontario. He was not believed when he reported it. Mike was so angry at life that he came to the point where, at age 13, a psychiatrist warned him he could become a serial killer.

Mike didn’t go down that road though. “God had a different plan for me,” he says. At 13, his mom took him back home, but that didn’t last;  he and his mom couldn’t get along, and within a few months Mike was on the streets of Hamilton, Ontario, running with the Sherman Street Gang and associating with biker gangs. He turned to drugs and alcohol. He was often suicidal, from age 11 to 23, but was stopped by a still small voice on the inside. And, there was a dream . . . Mike wanted to farm.

At 19 he married — this went sour in about a year. Following separation, he went west but returned a year later. After a divorce, there were more drugs and more alcohol; life was falling apart. He was trying to find peace, running from his past but feeling that it was overtaking and destroying him. “Victims of child abuse have a tsunami wave of emotion chasing them all the time,” he says.

Mike headed west again at age 23, traveling with another biker, but felt an inner voice from God telling him to turn around. He fought it for 800 miles, then began to reason with this voice in his head. Eventually he turned back. A tire on his bike blew near Thunder Bay, and he almost slid under a truck. Leaving the damaged bike in the ditch, he hopped a plane back home, experiencing a peace and joy he didn’t understand. Shortly thereafter, he walked into a gospel service in a church basement, wearing his biker leathers, a full beard and long flowing hair. Six guys prayed with him there. Mike was broken and wept, but he was a changed man. “I never turned back,” he says.

In the years following Mike held many jobs, but only for short times. “Couldn’t keep a job because of childhood traumas . . . you become very dysfunctional in life,” he says. He married again and the couple started a family. One day at work, at age 27, he felt God speak to his heart, calling him to raise buffalo. When he shared this with his wife, she laughed, but the more Mike looked into it, the more excited he got. He hadn’t even realized buffalo could be farmed. Although his wife was sick of hearing about them within a few days, Mike continued to investigate possibilities. He found a guy who was raising buffalo, and a farm near Brantford where he could begin his venture with five bison, and a neighbouring farmer who helped him learn to farm, as he had no previous farming experience.

These days, Mike’s farm near Hagersville, is not the best cropland, as it sits close to the rock and

Inside the working chute. Mike stands by the sorting gate. Animals can be sent right or left or ahead into the squeeze chute.

has extensive brush cover. But this is an advantage to Mike, as the brush provides cover for the bison herd in winter. Their extensive shaggy coat gives them perfect protection from winter temperatures and the brush breaks the wind.

Although now kept on farms, buffalo, or bison, should not be considered to be domesticated. They are still a wild animal, Mike explains. “If the tail is up and the animal is pawing, you are in trouble,” he says, adding, “You have to have a passion for them.”

Mike culls individuals that are overly aggressive. He has sustained a few injuries over the years, but has been fortunate to avoid serious ones. Once several bison escaped their fence and one was hit by a truck. Suffering a broken leg, and enraged with pain, this 2200 pound bull chased Mike. It was after dark, he couldn’t really see where he was going and ran into an apple tree, knocking himself out cold. Luckily, the buffalo continued on. Mike landed in hospital, and almost lost an eye from a branch on the tree. Another injury occurred when a hand-raised cow pinned him in a corner between her horns. When she pulled back and twisted her head, Mike suffered a two-inch gash in his side from her horn. Bottle fed animals are the most dangerous, Mike claims, “They’re unpredictable.”

Set-up costs to keep buffalo are high; you need at least six foot, heavy duty fences and a minimum of one acre per buffalo. The corral system needs to be very strong to handle these animals, and you need a 2 ½ ton squeeze chute. Running chutes cannot be longer than ten feet, as once running, these animals are capable of crashing through wood or even concrete walls, and have been known to snap hydro poles.

Trailering plans are needed to avoid standing still, as they are capable of demolishing a trailer if left standing. The animals are able to jump 10 feet from a standstill, and can go over a 12 foot wall. They are able to run 30 mph (50 kmph) for short distances. Mike estimates fencing costs for 80 acres to be approximately $60,000, with handling facilities costing another $15,000 to $20,000.

Breeding stock is also expensive. A six month old calf (bull or heifer) will set you back $2500 to $5000, depending on which part of the country you live in. Mike emphasized that the key to starting a new herd is to buy young stock, as they will adapt to new conditions more easily than mature stock.

Bison are herbivores, eating up to 60 pounds/27 kg of forage per day. Mike’s herd eats mainly grass and hay, with salt and mineral licks provided. He utilizes sweet corn husks and stalks that he obtains at low cost from a farmer nearby. Feed costs run about $2000 per animal per year. Mike uses pour-on Ivomec spring and fall to control parasites. There is rarely any other vetting required.

A mature bull stands about seven feet at the shoulder and weighs up to 1360 kg. (3000 pounds). Cows are significantly smaller, weighing about 771 kg. (1700 pounds). Calves, which arrive in May and June, weigh about 70 to 100 pounds at birth, and are called, “red dogs,” due to the light red colouring of young babies. They gradually change colour to the dark brown of the adult animal over the first few months. Bison can live up to 30 years.

The animals are alert and suspicious of dogs or coyotes, and very protective of their calves, so predators are rarely an issue. Bison can be pastured and kept with cattle, but grown stock will kill horses.

Mike has assisted several other people in getting established with bison. He regularly attends community events to educate people on the benefits of bison, and visits schools, taking along a life-sized stuffed buffalo, artifacts, skulls, hides and information on how the buffalo were used by the First Peoples of North America. Kids love to be able to touch and feel the items he takes. He maintains a small on-farm store, where customers can purchase buffalo meat, hides, heads or skulls. Visitors have come from many areas.

Christine Goldsmith visited from England a couple of years back. She recalls, “It was a totally amazing visit. Mike was so knowledgeable about his stock and the shop very interesting, even took some buffalo meat home to try. One of the best tasting meats I have had.”

Mike built his bison herd up to 70 head but 25 years later, has downsized to 45. He enjoys his family — five kids, and now seven grandkids. He has an easy laugh and is laid back, but delights in pranking people. He has a generous spirit, genuinely caring for his neighbours and friends. Thanks in part to buffalo, Mike is finally a peaceful man.

Bison history Bison are North America’s largest land animal, and estimates suggest up to 60 million of them roamed the continent in 1800. The bison provided the aboriginal people of North America with food, shelter, tools and fuel. During the 1800’s, habitat loss from settlers and hide hunters reduced numbers drastically, so that by 1889 less than 1000 were left. Efforts by ranchers and conservationists prevented the total loss of the species, as small herds were kept privately or in national parks. Buffalo farming began in earnest in the 1980’s and 90’s, as the public discovered this heritage food. There are now almost 145,000 bison in Canada, with about 400,000 across North America.